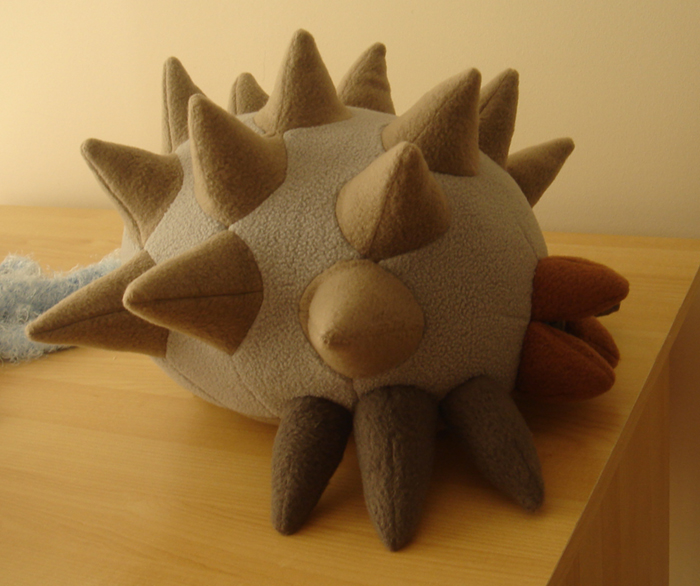 So you wish to bring about the destruction of the planet. Not a problem! With this handy tutorial, you'll be well on your way to make your own Lavos plushie that will burrow into your heart like it will burrow into the center of the earth to lie dormant for 65 million years. But crafter be warned; this plushie is not for the faint of heart. It is of an advanced skill level and as such, I won't be explaning every little detail. Good luck!

For techniques used in this tutorial, please refer to the Sewing techniques and materials guide for beginners. Sewing machine is highly recommended, but not necessary.
Do not cut out the pattern pieces on cloth until the tutorial instructs you to.
What colors of fabric used is up to you, but the photographs provide a recommended suggestion.

Cut out one Front shell piece and fold along each slit with the right cloth sides facing. Sew along where the pink lines on the pattern indicates. 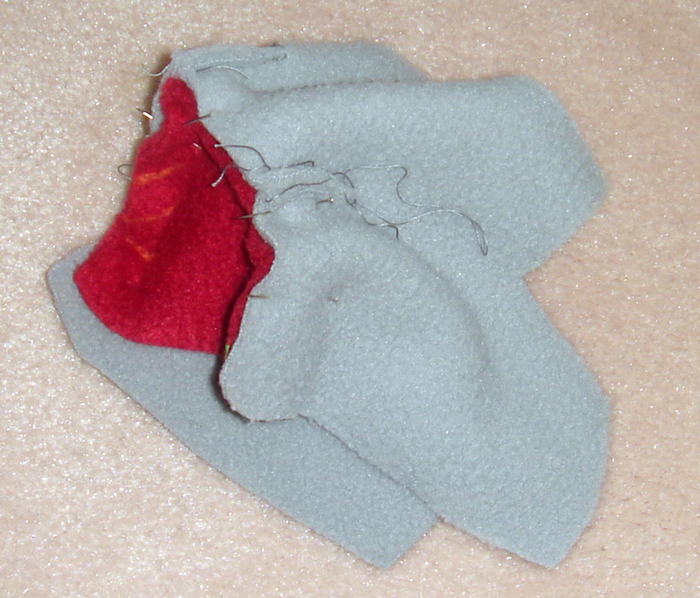 Cut out a Face piece. Match A to B of Face piece to Front shell piece with right sides facing. Pin them together and sew. 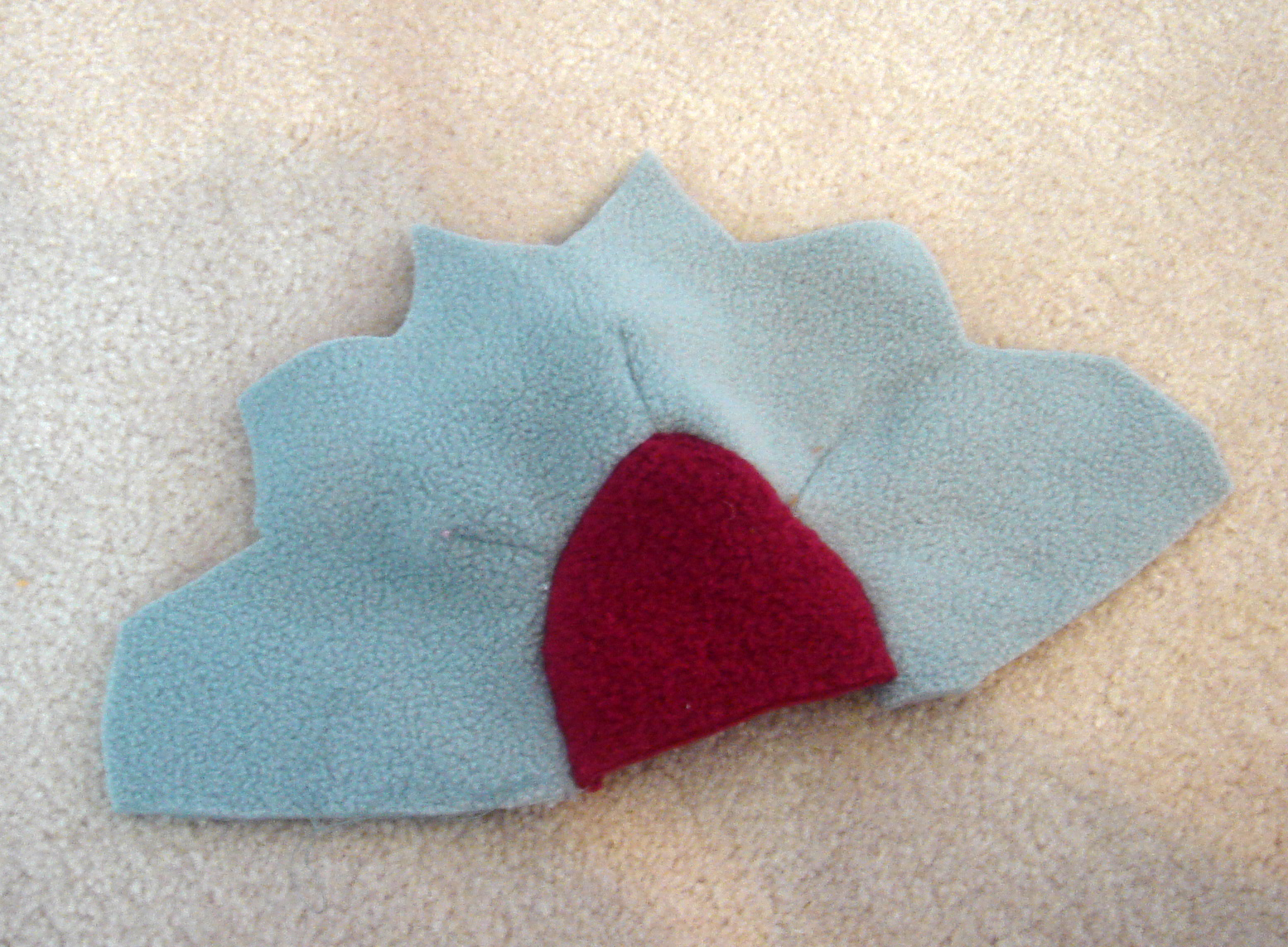 Cut out the 6 Center spike pieces and 12 Side spike pieces. Match each one to a like piece, with right sides facing. Sew along where the pink lines indicate. Trim the tips of each spike so that itĺs easier to turn inside out. Avoiding cutting the thread. 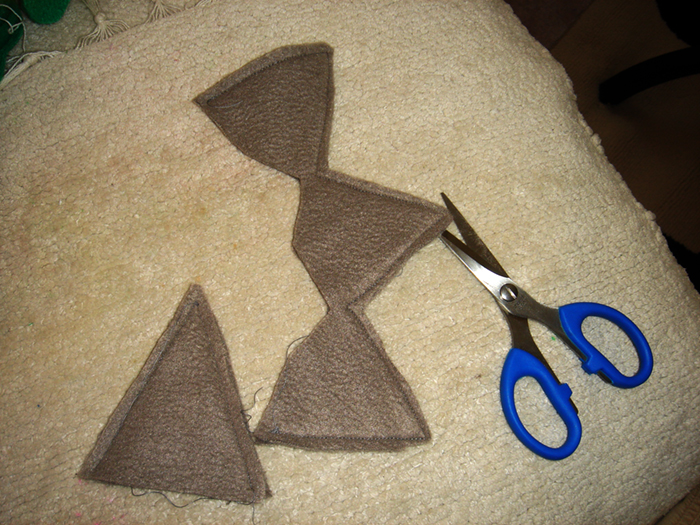 Cut out the Bottom piece, including the 3 slits on it. Fold along each slit and sew them closed. This tummy tuck helps Lavos from being too fat and also gives him a nice invertebrate look. 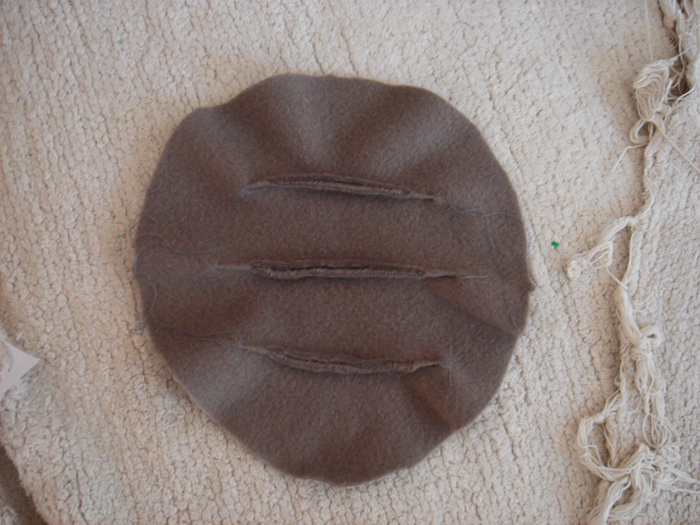 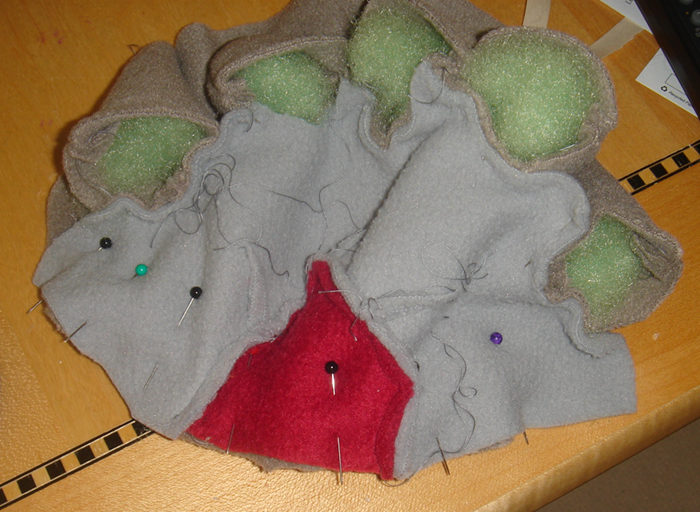 This part is tricky. Take one of the Center spike combinations and match up FGH with FGH on the Face combination, pinning them together. Only use one layer of the Center spikes. Make sure the right sides of the cloth are facing. You will need to force the cloth to pucker in weird ways. If it looks like the Center piece and Face piece actually match up somewhat, then youĺre doing it wrong. Sew along where the pieces connect. You may find it easier to do this by hand than by machine.

Take a Side Spike combination and match up I with I on the Face combination. In a similar way to attaching the Center spikes, the cloth should pucker wildly and make sure the right sides of the cloth are facing. Sew them together. 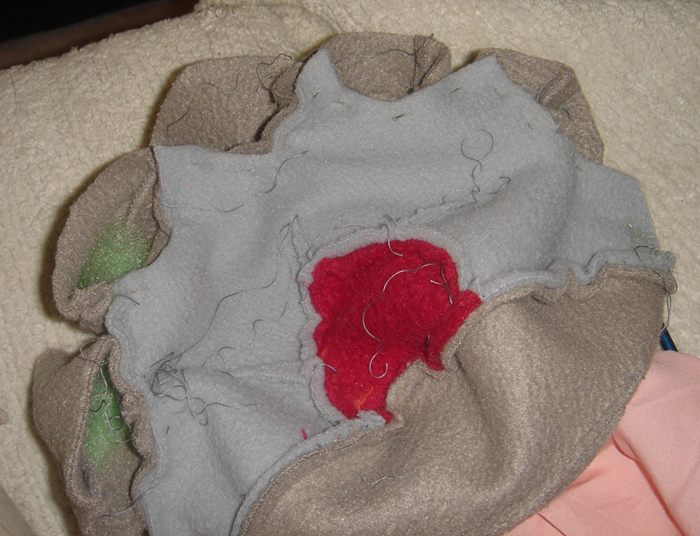 Cut two Midsection top pieces. Take note of the Toward Center direction indicated on the pattern. The arrow points towards the center of Lavos, so the second cloth piece needs to be turned around when being attached. Pin the first Midsection piece to the row of five spikes, again matching FGH and II. Make sure the Toward Center direction is facing away from these spikes. Sew them up. Also sew a small area of the Midsection piece to the Front shell piece marked E and D.

Then take another set of Center spikes and two Side Spikes and attach them to the other end of the first Midsection piece. Sew them.

Take the last Center spike and two Side spikes and attach them to the FGH and II of the Midsection piece. Sew them together.

This is how it should look on the inside. 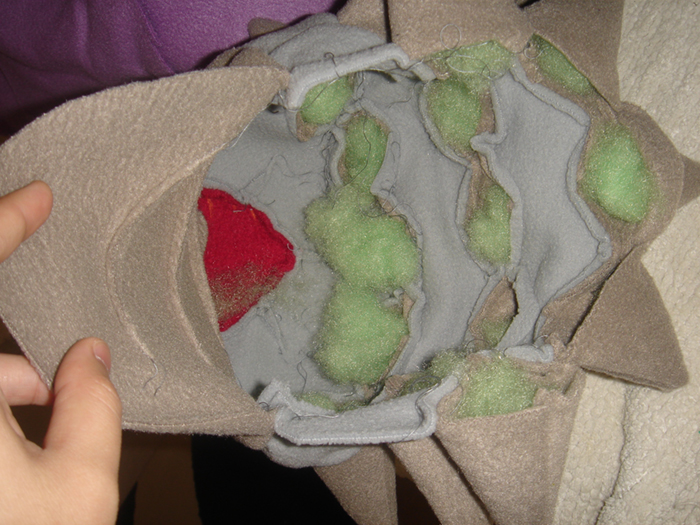 Cut 3 Fang bottom and Fang top pieces. Fold them symmetrically along the cut slits and sew them where the pink lines indicate. Now match each top with a bottom piece, right sides facing, and sew along either sides of the fangĺs point, leaving an opening. Turn the three fangs inside out and stuff them. 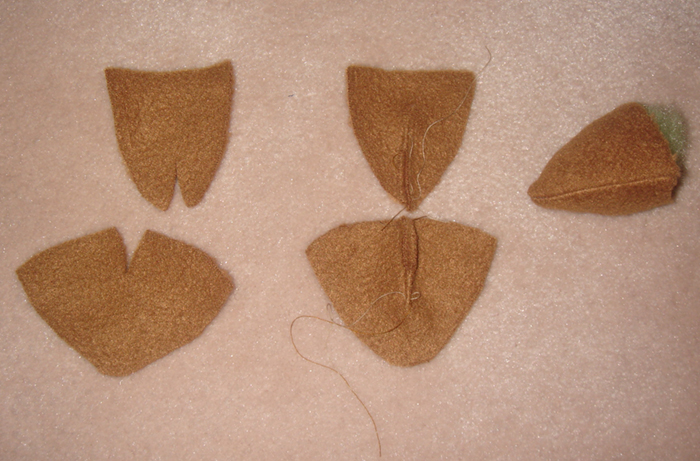 Tuck the opening of the jaws a little, and pin them in a triangle to the right side of the Face piece. Try to cover the seams of the Face piece. Use the ladder stitch to sew the fangs along all their openings. Add little bits of stuffing as you sew if you need to. 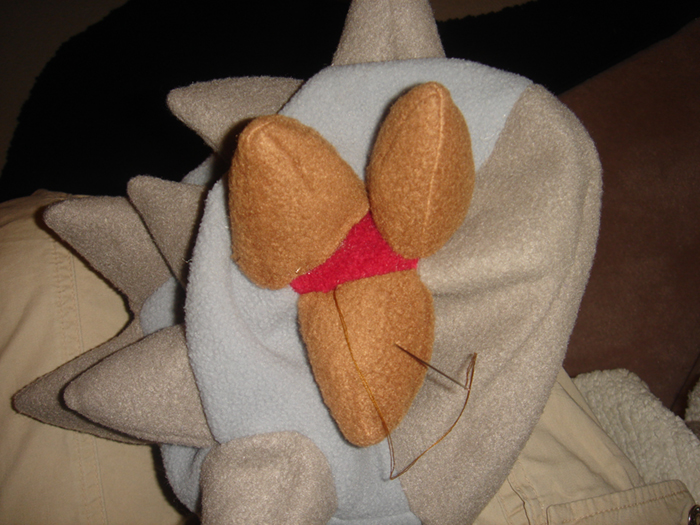 Cut out two cloth Butt pieces, but one of them needs to be inversed. The easiest way to do this is to fold your uncut cloth in half with right sides facing, and cut two pieces at once. Sew both pieces together with right sides facing along the curve of K. Open up the combination and match FGH and II to the final layer of spikes as you have done before, and sew them together. Donĺt forget the little J section. This is what the right side of Lavos should now look like. 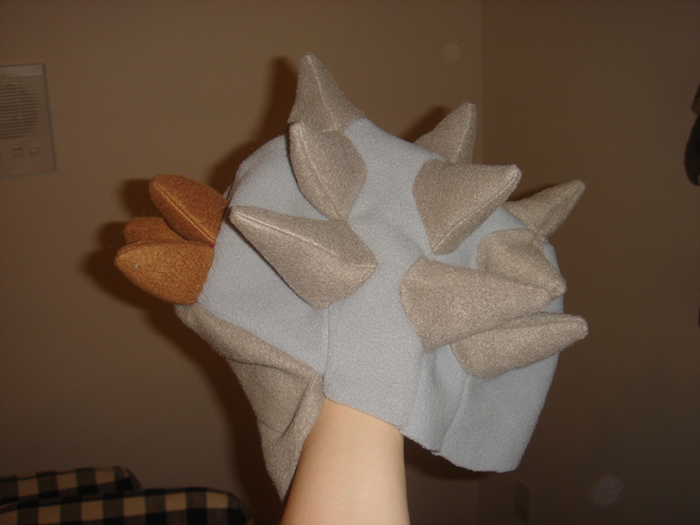 Turn Lavos outside in, and pin the unsewn areas of the Bottom piece to the unsewn edges of everything else. The seam of the Butt pieces at L should match with L at the center of the Bottom piece. Sew these together, but leave a hole so you can turn Lavos inside out, preferably big enough to fit your arm through. 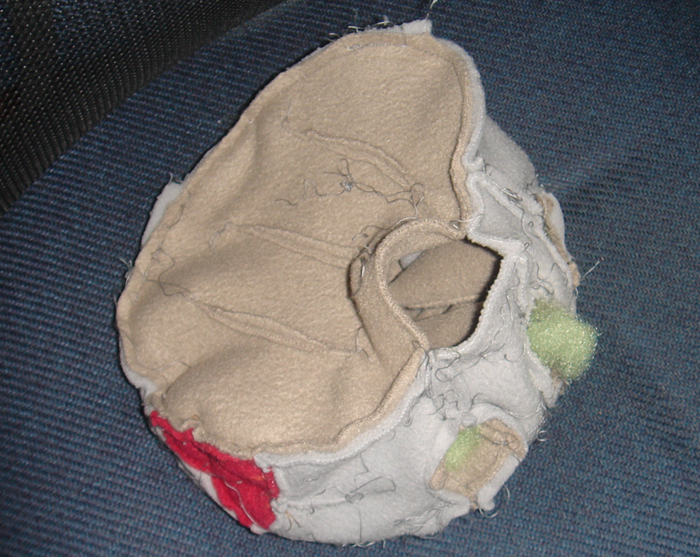 Turn Lavos inside out. Attach Lavosĺs eye, depending on what kind of eye you got. I bought these nifty animal eyes, but buttons or even just a circle of extra cloth will do.

Stuff Lavos slowly. Youĺll want to do a lot of fluffing up, squishing and ripping off little bits of stuffing so that the stuffing doesnĺt clump and become lumpy. Youĺll want to stuff rather stiffly, especially the spikes, otherwise the stuffing will sink down into the body leaving droopy spikes. Sew the body closed using the ladder stitch. 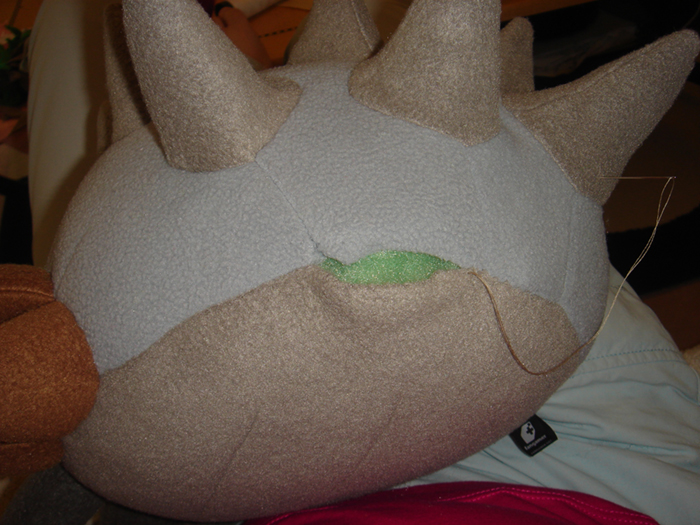 Cut 4 S. leg bottoms and S. leg tops, and 2 L. leg bottoms and L. leg tops. Make Lavosĺs legs in a similar way to how you made the fangs. Sew up the slits along the pink lines, match each bottom to a corresponding top piece with right sides facing, and sew along their leg tips. Turn them inside out and stuff them. 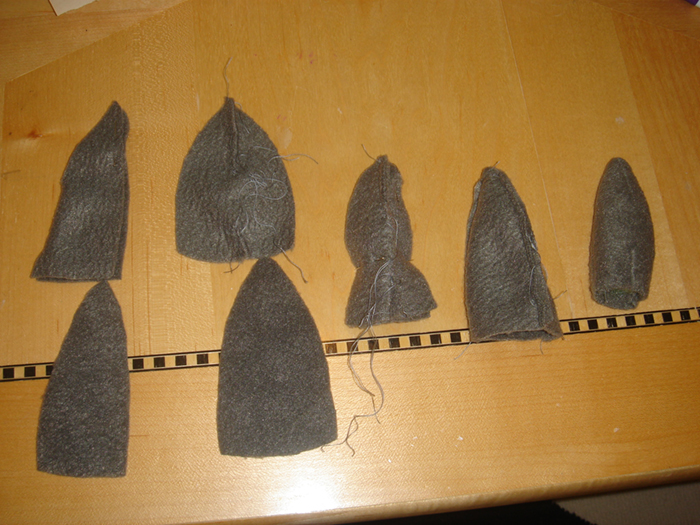 Tuck the legsĺ openings and pin them to where you want them to go on Lavos. Sew them on using the ladder stitch, stuffing a little as you go. 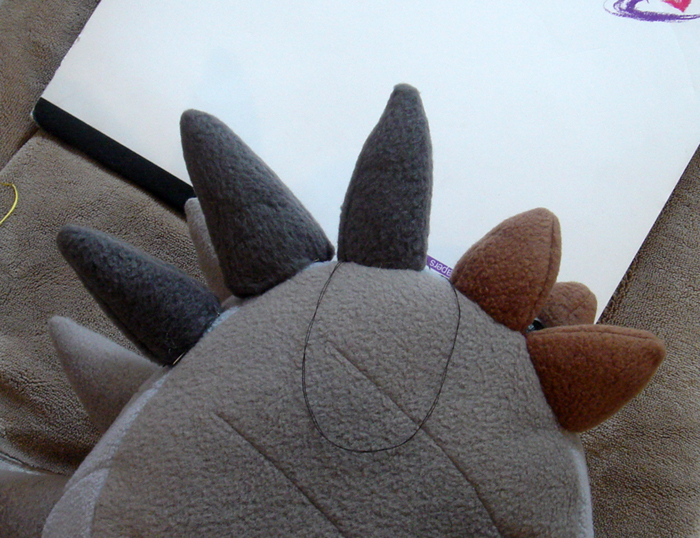 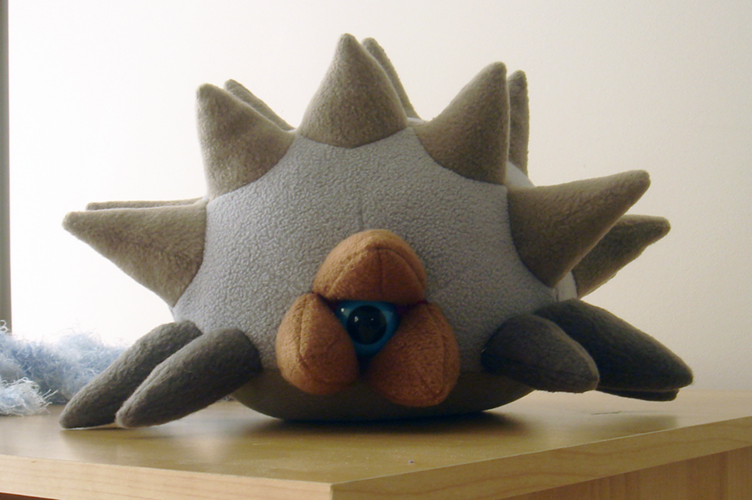 GREAT GOING, YOU HAVE CREATED LAVOS AND YOU WILL HEAR FROM MY LAWYER WHEN IT CAUSES THE APOCALYPSE.

Back to the Tutorial Hub